With over 365 square miles within the Dartmoor National Park it is not difficult to find places to visit. If you are short on time it can be difficult to decide where to go. In this post I will give you a brief introduction to 10 great places to visit on Dartmoor. 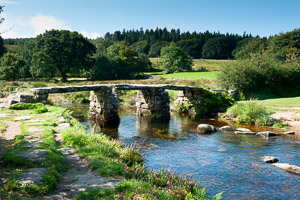 Postbridge is a hamlet on the main road across Dartmoor.  It is here that the road crosses the East River Dart over an 18th century Grade ii listed bridge.  Alongside the “new” bridge is the original clapper bridge thought to date from the 13th century.  The clapper bridge is one of the best preserved ancient bridges on the moor and probably the most photographed.  Postbridge is also home to one of Dartmoor’s visitor centres, though it is currently closed for re-development.  Postbridge is on the edge of Bellever forest which is a great place for cycling and walking and also to see Dartmoor ponies who graze in the forest to help with conservation.

For more images of Postbridge visit my online gallery and shop 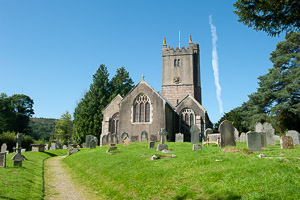 North Bovey is a small isolated village a few miles from Moretonhampstead, accessed via some quite narrow lanes.  The village has many thatched buildings including the Ring of Bells pub which has recently been rebuilt after two devastating fires.  The church, dedicated to St john the Baptist dates from the 4th century and the village green is home to a stone cross. 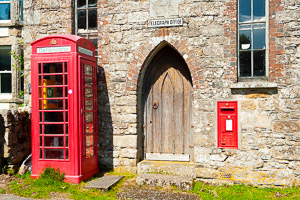 Belsone is a small picturesque village on the northern edge of Dartmoor a few miles outside Okehampton.  The village has a relaxed feel because visitors are encouraged to park in the free car park on the edge of the village.  Belstone is recorded in the Doomsday book as Bellestam.  This is a great place to start a walk to the Nine Maidens Stone circle located nearby.

The image shows great examples of re-purposing.  The building was a Zionist Chapel, then a Telegraph office.  I am not sure what it’s current use is though.  The former red K6 telephone box no longer holds a telephone but a community defibrillator. 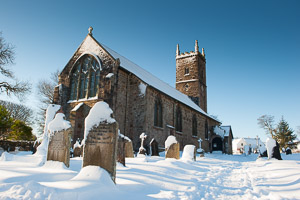 Princetown is probably the most famous village on Dartmoor and famed for its bleakness.  Even if you don’t know its name you will probably have heard of the notorious Dartmoor Prison, with its infamous inmates from the 1960’s.

What Princetown lacks in prettiness it makes up for in history.  The village came into being in the late 18th century, when Sir Thomas Tyrwhitt, Secretary to the Prince of Wales leased some land from the Duchy of Cornwall. Sir Thomas intended to farm the area and encouraged people to move there.  He also suggested that it would be a good location for a prison to house the prisoners from the Napoleonic wars who were being held in poor conditions on ships in Plymouth.  The village is a great base for walking and cycling on the moor with lots of trails to cater for all levels of adventurer.

The picture to the left is St Michael and All Angels, built by prisoners and now maintained by the historic churches trust. 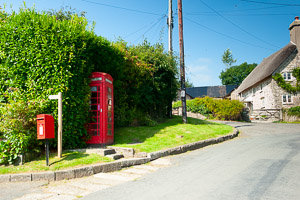 Holne is another ancient village dating back to the 11th century and is one of the few Dartmoor villages with an active farm and farm shop.  The church of St Mary the Virgin dates back to the 13th Century, as does the hollow yew tree in the church yard. The village is close to the two moors way and offers many opportunities for walking.  The river Dart which passes outside the village is a popular place for kayaking. 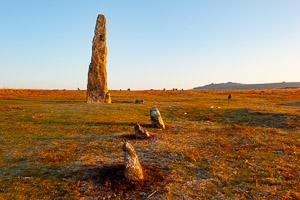 Dartmoor is scattered with prehistoric remains and settlements.  Merrivale is one of the best bronze age site on Dartmoor. Here you will find stone rows, cairns, large standing stones and a stone circle.  The stones are easily accessible with nearby parking, there are no dedicated paths on this part of the moor as it is designated access land so take care and wear suitable strong footwear.  Be mindful that the weather can change and it is easy to get disorientated if the famous Dartmoor mist descends. 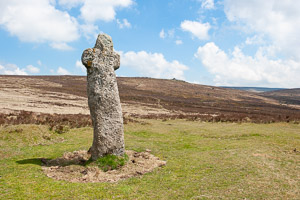 There 132 recorded stone crosses on Dartmoor dating back to pre-historic times.  Many like Bennet’s cross have acted as waymarkers to guide travellers across the moor. Others are boundary markers marking the point were neighbouring estates meet. Bennet’s cross is close to the main B3212 road between Postbridge and Moretonhampstead.  Bennet’s cross is a short walk along the main road from the Warren House inn or there is a small car park close to the cross.  If you want a more adventurous walk,tracks lead away from the cross to the remains of an 18th century mine.  Further across the moor from the cross is Grimspound, a bronze age walled settlement containing the remains of 24 round houses. 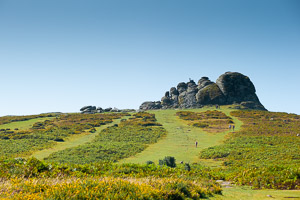 Haytor is one of the moors most famous and accessible tors with lots of parking and a visitor centre close by.   From the top of Haytor rocks it is possible to see the sea.  The lower slopes of Haytor Down were quarried during the Victorian era and stone from here was used in London Bridge that is now in Arizona.  The quarry is a short walk from the car park along the granite sleepers from the tramway used to transport the quarried stone down to the Stover Canal. 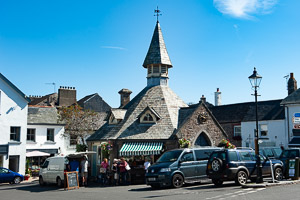 Chagford is a small but bustling market town on the north-east side of the moor 4 miles from Moretonhampstead.  There has been a settlement here for over 4000 years according to archaeological remains. Chagford grew as a town thanks to the trade in wool and tin mining.  In the 14th century the town became a stannary town where tin could be traded.  Despite only having a population of around 1400, Chagford has a surprising amount to offer. The town boasts many independent shops, cafes, pubs and restaurants, it even has a library and swimming pool.  The picture shows the market house in the centre of Chagford. 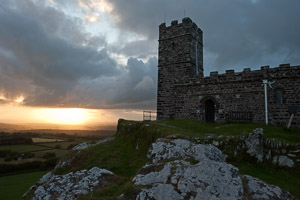 Brent Tor is located four miles north of Tavistock and rises to 1100 feet at the top.  It can be seen from miles around. Sometimes when the conditions are right it can be seen poking above a sea of low-lying mist like an island.  The tiny church of St Michael de Rupe,  atop the tor can seat just 40 people and measures 15 by 37 feet with a 40 foot tall tower.  If you walk to the top of the tor your reward is panoramic views of west Devon and the high moors.

I hope this brief introduction has inspired you to head out onto Dartmoor.  As you can see there’s a huge variety of scenery from; the high moorland to the picturesque villages.  If you want to read about more places on Dartmoor to visit please head over to my post 9 Great Places for Photography on Dartmoor

Please select all the ways you would like to hear from Dartmoor Photographer:

You can unsubscribe at any time by clicking the link in the footer of our emails.

We use Mailchimp as our marketing platform. By clicking below to subscribe, you acknowledge that your information will be transferred to Mailchimp for processing. Learn more about Mailchimp’s privacy practices here.