Dartmoor has a rich pre-historic past with hundreds of sites of interest including many stone circles.  Other monuments include stone rows, standing stones, cairns, cists, hut circles and burial mounds. It is believed that most of the sites on Dartmoor date from the late neolithic (about 2500 BC) to mid-bronze age (about 1000 BC).

As with all pre-historic sites the exact use of the stone circles found on Dartmoor can be speculated at.  Archaeological finds and remnants from past inhabitants only give glimpses into the lives of our pre-historic ancestors. With no written records we will never know the full extent of the rituals and ceremonies they were used for.  Because of this mystery standing stones and stone circles will always be mysterious and magical places steeped in legends from later dates. 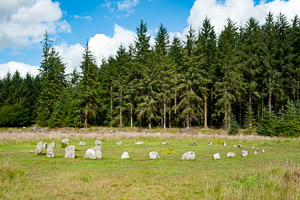 Fernworthy stone circle is situated in Fernworthy Forest, which surrounds Fernworthy Reservoir about 3.5 miles SW of Chagford.  The circle dates from the Bronze age and is a true stone circle of 20 metres in diameter with 27 standing stones. Being sited in a clearing of the forest the landscape probably closely resembles the site when it was originally built. Access to the site is fairly easy on foot being close to a forest road.  It is an easy 3 mile round trip walk from the South West Lakes car park by the reservoir.  It is possible to park closer in one of several lay-bys along the road between the car park and the start of the forest road. 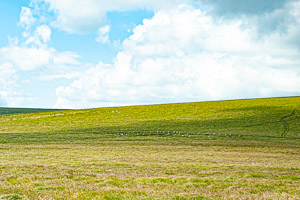 Grey Wethers stone circles are unique being the only site containing two side by side circles on Dartmoor.  The circles stand on the open moor about 1 mile south-west of Fernworthy Circle.  The Grey Wethers stone circles measure 32.3 metres and 33.6 metres respectively and each consists of 30 stones. Access is only on foot across open moorland.  Although they are easy to find on a clear day beware of venturing onto the moor without suitable map and compass in less clement weather.  Starting from the SW Lakes car park at Fernworthy it is about a 6 mile round trip to visit these and the Fernworthy circles. 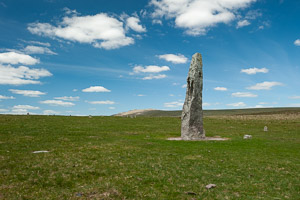 Merrivale stone circle is one of the less impressive circles on Dartmoor but it does though site within a much wider landscape of monuments. The circle is 19 metres in diameter and made up of 11 stones all less then half a metre tall.  Other monuments in the area include; a 3 metre high megalith, two double stone rows and numerous cairns, cists and burial mounds.  Not to mention a settlement consisting of a number of hut circles and an enclosure.  Merrivale circle is easily accessible on foot from the Four Winds car park between Princetown and Merrivale or from the Merrivale East parking area.  You can read more about this area in my guest post on Flip Flops or Wellies. 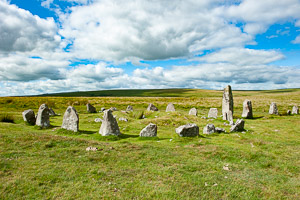 Hingstone Hill Stone circle is a cairn circle 11.5 metres in diameter consisting of 24 stones.  The circle sits at the end of a 349 metre long stone row on the north-eastern side of Down Tor.  Access to the circle is on foot across open moorland.  From the Whiteworks Parking area, 2 miles SW of Princetown the circle and row are a 4 mile round trip.  Alternatively the site is accessible from the northern end of Burrator reservoir. 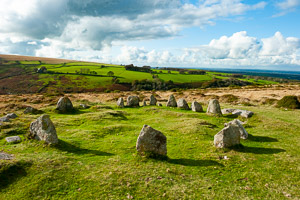 Nine Maidens Stone circle is situated a mile SW of Belstone on the northern edge of Dartmoor.  The circle is also known as Nine Stones or Seventeen Brothers. The stone circle is a cairn circle of 16 standing stones with a diameter of 7 metres. The stones surround a burial chamber that was robbed long ago. Nine Maidens circle is shrouded in folklore with stories of dancing maidens turned to stone brought to life by the ringing of the church bell.  Access to the site is an easy 2 mile round trip walk starting from the free car park on the edge of Belstone village.

I hope you have found this post useful, below are links to similar posts that you also may find of interest.  If you would like to be kept up to date on new posts as they come live please use the subscribe form to the right to leave me your details.

Please select all the ways you would like to hear from Dartmoor Photographer:

You can unsubscribe at any time by clicking the link in the footer of our emails.

We use Mailchimp as our marketing platform. By clicking below to subscribe, you acknowledge that your information will be transferred to Mailchimp for processing. Learn more about Mailchimp’s privacy practices here.